All of the exhibits in our museum are hands-on, open-ended, and catalysts for future learning.  They are designed to engage the traits that both artists and scientists share, and to create an environment for exploration and creativity. Below are some examples of exhibits you are likely to find during your visit. These and other exhibits, as well as a number of table-top activities, rotate through the museum so that your experience at RIMOSA will be a little different each time you visit.

The RIMOSA Animation Station is a one stop shop for creating animations. Using an iPad and an app named “Stop Motion,” users can take a series of still images and then string them together to create animated movies. The iPad is attached to an arm that allows you to shoot downward and use the exhibit’s table as a backdrop, or to shoot horizontally for a more three-dimensional look — all while seeing your creation come to life on a large overhead monitor.  This photo was taken while the exhibit was on loan to the Mount Pleasant library in Providence. 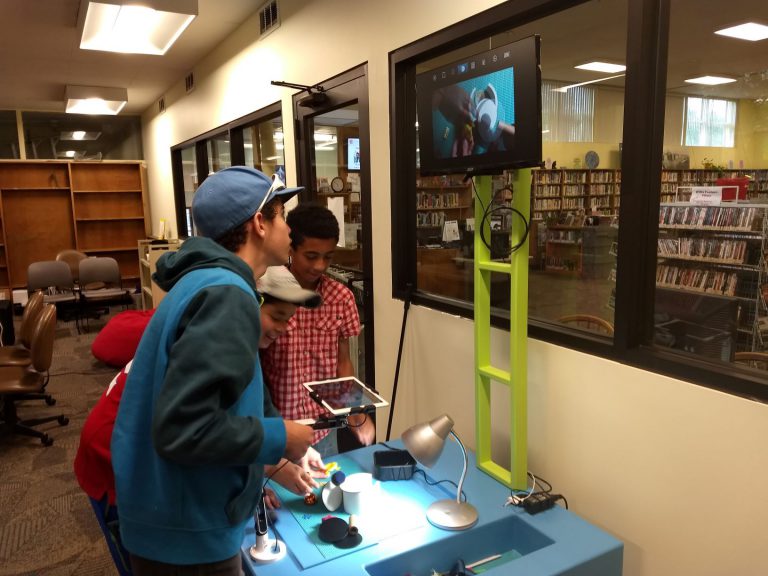 This video is a stop-motion animation created by some museum visitors using the Animation Station and shooting horizontally.  You can see many other movies that our visitors have made here in our iCloud account.

Visitors experiment with the movement of objects in turbulent air.  The vertical air stream is generated by a large fan at the base of the exhibit and directed upwards through a large, clear plastic tube.  A variety of objects may be tossed in the open top or fed in through a space at the bottom and watched as it spins, floats, sinks or flies in the wind. 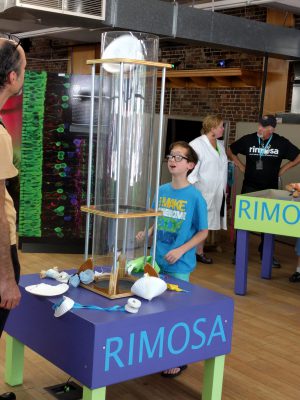 In this video, shot in slow motion and from the top downwards, you can see the behavior of a whirlygig created by one of our museum visitors as it moves inside the Flight Tube.

This exhibit consists of a table that supports three built-in pendulums. Two pendulums connect and where they meet, a pen is connected with a clip. The third pendulum supports a platform where a sheet of paper can be placed and held on with a clip. Once the pen and the paper are in place visitors can manipulate the pendulums and watch the arms create an intricate geometric image. 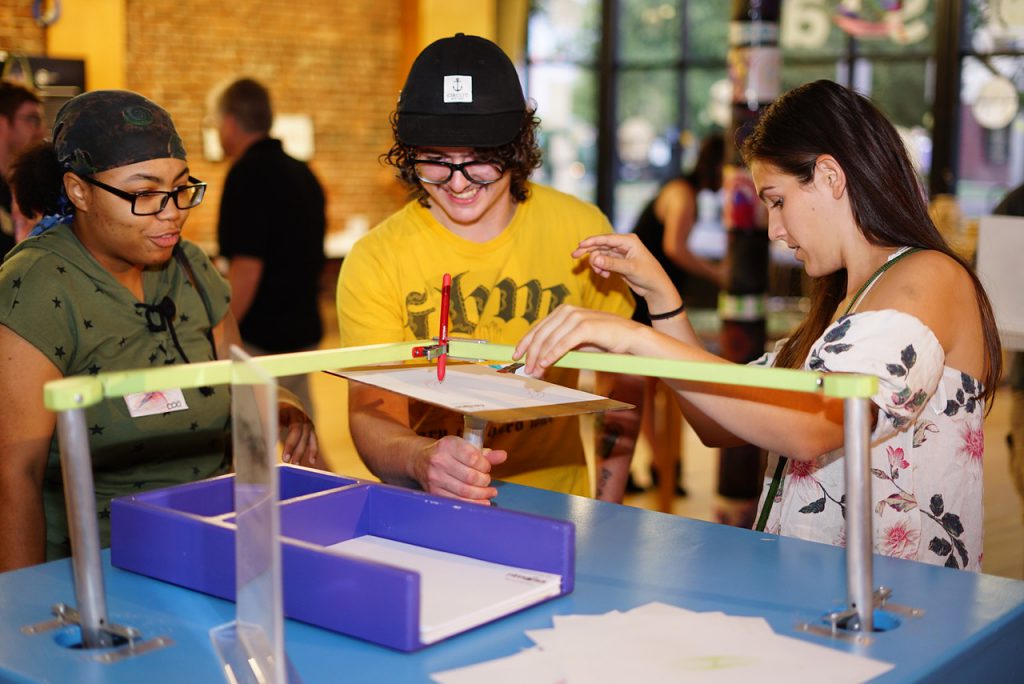 This video shows the Harmonograph in action.  Each rotation of the pen describes the relationship of the timing between each of the three pendulums.

The Moon Dust Table is a square table with a rotating disk inset in the top.  Like a potter’s wheel, the disk is constantly spinning. Loose sand is placed on top and visitors can drag their fingers and other things (like combs, brushes and palette knives) to see how it moves.  Sand that falls off the wheel is caught in the area below and users can scoop it up to return it to the wheel. 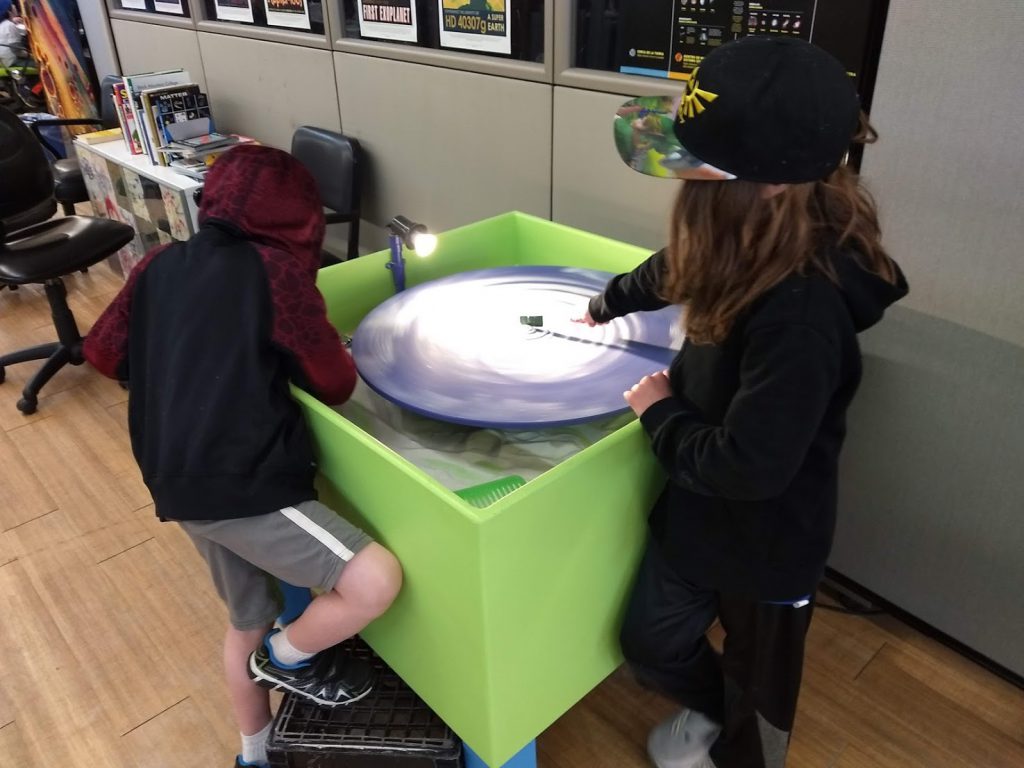 This video, shot from the top downwards, shows the Moon Dust Table in action as a creative museum visitor makes a beautiful design!

This exhibit was constructed from a bicycle.  For each visitor, a new piece of paper is attached to the painting platform with binder clips.  Visitors may either squirt paint prior to turning the crank (what used to be the bicycle pedal) to cause the painting platform to spin rapidly, or start the paper spinning and then add paint as it spins.  When they are done, they squeeze the handbrake to stop the spinning and see what paint and centripetal force has created.  They are always surprised! 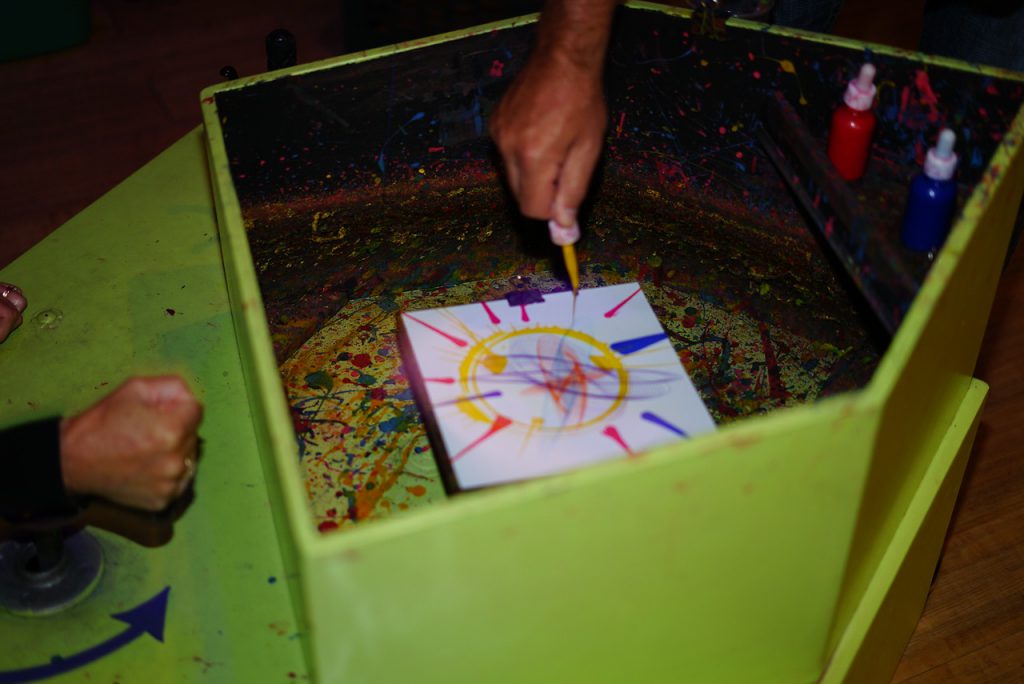 This video, shot in slow motion, shows what is happening as the paint is dropped on the paper while it spins, and afterwards how the sticks are used to scrape designs into the paint.

The Zoetrope was one of several precursors to modern films.  It is made of spinning drums with slits that allowed the viewer to observe the subtly changing images inside, allowing the images to appear, to the observer, to run together and effectively become “animated”.

“Zoe” is a Greek prefix meaning “life” and “trope” means both “turning” and “turning into,” making a play on words that combine to mean it turns pictures into life.  This design is based on the one created by a sophomore at Brown University, William E. Lincoln, in 1865 and later patented by Milton Bradley and widely sold as a toy.

Using strips of paper and markers, visitors can draw their own series of changing images, then place it in the zoetrope and use their muscles to set it spinning and get their creation moving! 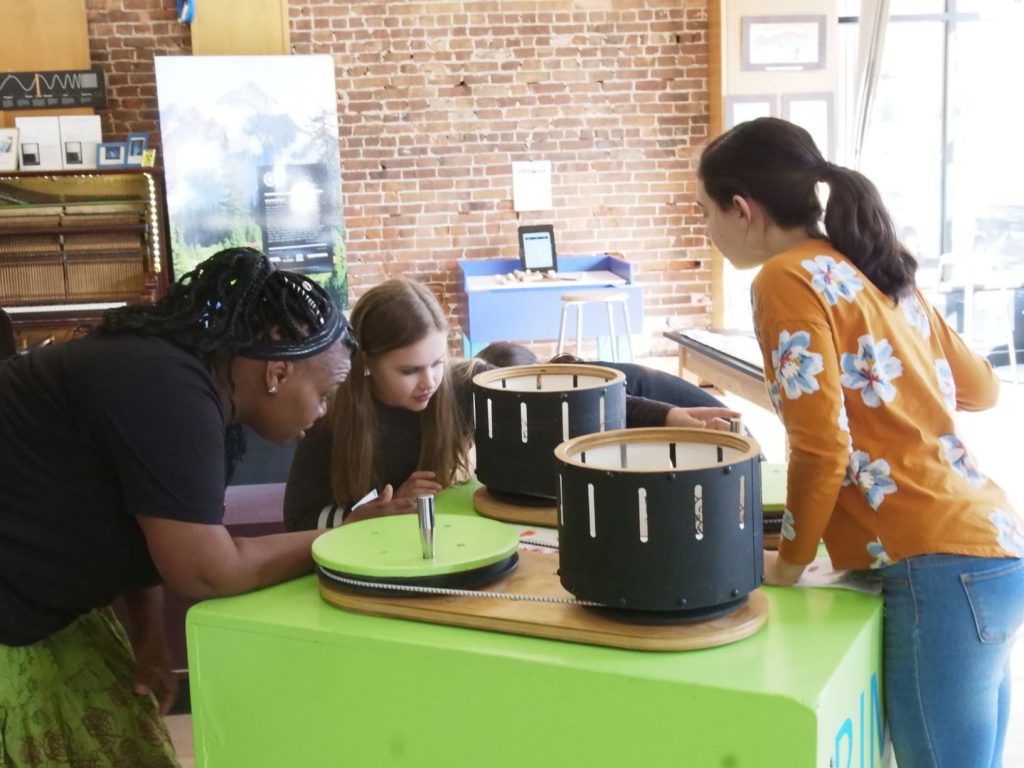 This video shows a very well-done Zoetrope strip created by one of our younger visitors.  Watch the crane’s arm move up and down, and notice how the timing of the slits in the Zoetrope passing by falls in and out of sync with the frame rate of the camera!  This doesn’t happen when viewing with the eye, but is very noticeable when you take videos with a camera.